Ralph Pascucci is a five time Emmy Award winner with over twenty-five years of television experience. He has worked on the Today Show and four Summer Olympics for NBC. For ESPN he traveled the Formula One Grand Prix Auto Racing circuit for five years, and also worked on NCAA Basketball and Hockey, the Kentucky Derby, WTA Tennis, Major League Baseball, LPGA Golf and Sailing. He’s also produced arts and documentary broadcasts for the Public Broadcasting Sytem.

A graduate of Rensselaer Polytechnic Institute and licensed professional engineer. He founded Myriad Productions in 1985. He’ s been a guest lecturer at RPI and taught an Intermediate Video course in the EMAC and iEar? programs.

Ralph designed the video projection systems at both the Saratoga Performing Arts Center and Tanglewood and currently directs events from Santana to the New York City Ballet. 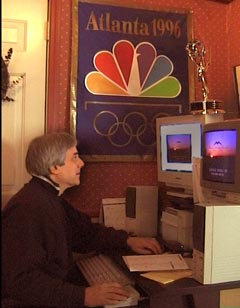 In reality, most (if not all) of the work is done by the talented staff at Myriad!